-Deploy Morgan and Lucina wherever. They likely won’t be helping Robin finish the map, so they’re just picking up whatever EXP they can get.

Turn 1 (Zerker beneath the quad stairs doesn’t have Counter)

-Kill the Zerker by between the two left-side stairs in the quad set of stairs.

-End turn 1 tile down, 1 tile left from the right corner stairs of the quad; this lures 2 Assassins into attacking at range from the stairs. 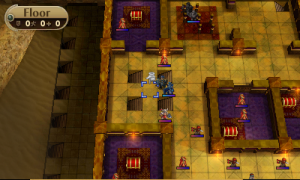 -Go 2 tiles below Assassin and either kill him or Elixir (if needed); everyone should be lured into attacking a range during EP.

-Kill Swordmaster who is blocking the right-side gap.

-Equip Bolganone and move 1 tile below non-Mire Sorc. If that Sorc doesn’t have Counter, feel free to kill him. Only the Mire Sorcs will attack before the Boss, so if Robin can kill him first (benchmark: 54 Attack against non-Aegis+), Counter on other enemies won’t matter. 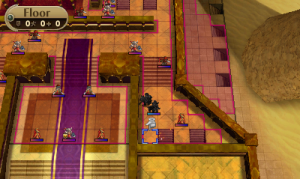 Zerker Under Quad Stairs Has Counter

-This will require some YOLO based on skillsets. Robin may have to wait at the edge of enemy ranges and work her way down the hall. Morgan and Lucina may come into play in eliminating Counter targets to allow Robin to move faster, as dawdling could mean dealing with instant Counter from the quad stairs.