Note that this is a long strat where there is still a decent risk of Fred dying. This is more of a strat for underpowered Robins facing too much ground Counter or a lot of Wyv Counter without the damage output to one-shot them (very low Mag or having to commit to multiple Crit Thunders to get through C5 and 6). The high volume of Wyvs means that most of the time, a Robin with average Mag and a forged Wind should be able to YOLO her way through the meager ground forces.

-Remove all weapons but the Hand Axe from Fred’s inventory. Give him the Concoction and some Vulneraries.

-Robin up 1 tile, trade away Fred’s weapons, then attack Barb at melee—at average 22 Mag, Robin with Mag Tonic and Thunder has 29 Attack (can kill non-Pavise+ in one hit, unless Aegis+; will eat 14 damage if Aegis+/Counter), which does 28 exactly to Barb to kill him. If not sufficient, use forged Wind. Against a Pavise+/Counter combo, use forged Flux.

-Chrom moves below Robin, trades away her tomes, then pairs onto her.

-Robin trades back the forged Wind and kills the Wyv below Fred.

-Fred trades the forged Wind away (NOTE: If incoming Barb has Luna+/Hawkeye combo, do not trade away the tome. In fact, if he doesn’t have Counter—or possibly settling for Aegis+ to just dampen the Counter—don’t trade it away, either) and heals if necessary. Other considerations: Robin needs to be able to one-shot a Thief on Plains if it has Counter (should be able to with average Mag of 22, unless Thief has Aegis+). Same deal with the Wyv that will be above her. 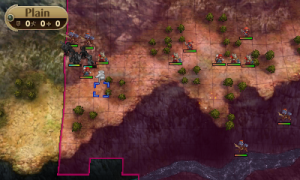 -If killed T3 Barb and lackies, can push up in a northward retreat if Wyv above Fred doesn’t have Aegis+/Counter combo. This allows Robin to stay equipped while evading approaching Counter melee Barbs (and Thieves, if Robin cannot one-shot them).

-If possible, try to kill to rig non-Counter enemies fighting Fred. With a Bronze Sword, he can semi-weaken them, but most importantly, gains 15 more Avoid against axes (NOTE: Possible issue is if Fred decides to start critting a lot, which could open him up to Counter melee or just way more attacks than comfortable; this makes facing Pavise+ actually a boon).

-Be very aware of the Hammer Barb’s positioning (it costs 3 Move for a Barb to get onto a Mountain tile), as he will go right after Fred if he can reach and get the kill (otherwise, any other enemy will just continue to body block Hammer Barb). He is very likely to butt up against Robin, which puts him nicely in range of both Fred and Robin. Robin can kill the Barb if he doesn’t have Counter, but if he does, Fred will likely need to spend a turn (or possibly two if Pavise+ or Aegis+ is involved) softening him up first. This is where a huge amount of the risk factor comes from, because if Fred needs his actions for healing, things could turn very ugly very fast.

-Try to leave the Thief who will be attacking Robin from below until after the Archers go down, as if that spot is clear, they may target Fred instead (and he doesn’t need more opponents).

-In a drawn-out battle that went for 17 turns and involved Fred face-tanking Hawkeye for a large part of it, ~10 Vulnerary uses and 4 Concoction uses were involved. So should try to conserve Panne’s Concoction in C5 (although, trading a use to save an Elixir use is acceptable) and make sure I’m coming into the fight with 12 Vulnerary uses (Cordelia adds another 3, which should be enough safety net).

-Generally speaking, it’s better to deal with the foot enemies first, since the forged Wind should be able to one-shot them (barring Aegis+ and the Boss). With this in mind, the opening turn can really set the pace for the whole map.

-Attacking the closest Barb from 1 tile up, 1 tile left allows for killing him, plus engaging the closest 2 top Wyvs and the second Barb and the Archer.

-Attacking the closest Barb from 2 tiles below allows for killing him, plus engaging the second Barb, the Thief, the Archer and the closest bottom Wyv.

-Attacking the second Barb from 2 tiles left allows for killing him, plus engaging the closest Barb, the third Barb, the Archer, the Thief, the second-closest top Wyv and the closest bottom Wyv. Note that this one can be very dangerous, as it engages a ton of enemies and pulls the second ground wave early.

-Waiting 1 tile right of the Woods to Chrom’s right will pull the closest Barb, the Archer and the closest bottom Wyv.

-Waiting 1 tile below the Woods to Chrom’s right will pull the Archer and the closest bottom Wyv. Do note that while the two positions that skirt the enemy ranges are typically safer in the short term, mounting pressure and lack of space will make protecting Cordelia that much harder.

-The enemies move in groups, with 2-turn gaps in-between (before they reach the party, anyway; they’ll move turn after turn, but groups other than the first will require multiple turns to arrive).

-Moving into range of a member of the group will still aggro them earlier, but this splits up the enemy melee rather nicely. This means that only a couple non-Wyv Counter melee should be in range at most, allowing for picking off one, tanking the second’s damage, then healing on the off-turn. The diciest part is probably in having to take extra damage from using Wind over Crit Thunder because Wyvs and ground melee Counter are both in range.

-T3: Final Archer, Barb, next 1 Wyv each from upper and lower

-T4: Remaining 3 Wyvs and the Boss 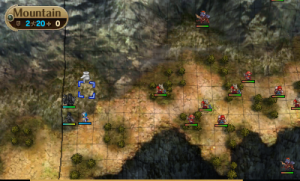 -Pair Robin to Chrom. Move Chrom up 1 tile and swap to Robin. Unequip. Heal if damaged, as Robin will have to attack next turn.

-Robin kills the Wyv (use forged Wind if necessary) 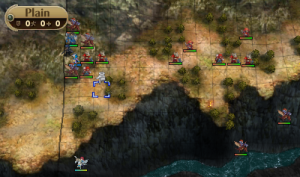 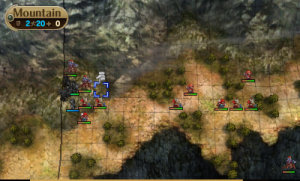 -Pass the Chrom start: Robin should have enough Avoid without Chrom, so focus on Fred’s survival is more important during EP. For PP, if Robin is attacking, she should take Chrom to do so; Fred should then take him back when trade-convoying her tome, as at C support, that gets him 3.5 more Avoid than with Cordelia. There’s also the higher chance of Dual Guard.

-The way the enemy ground units get mashed together, if Robin kills the Wyv to Fred’s right, this should make the second Barb attack him. This can make a difference of at least 6 less Hit; 11 if the Barb has Gamble. Being deeper in also means that the Archers and Hammer Barb will have a much harder time reaching Fred (they should still be a priority targets, though).

-Shortaxe Barb is going to target Fred from 2 tiles away and Robin won’t be able to do anything about it. If he has Hawkeye, especially with Luna+, consider the other turtle strat. Otherwise, his Hit should be really bad, which will let Fred ignore him (11 worse than Wyvs; 16 with Gamble).

-When the Boss is in range, don’t clear anything beside Fred, or the Boss will target him. Clear something 2 tiles away from Robin and he should shuffle into that spot.

-Be very careful in keeping track of Wyv positions. They are going to be constantly shifting, especially after Robin kills something.

-The Boss is one of those rare melee bosses. Be extremely wary of Counter, since he will not be one-shot by the forged Wind.