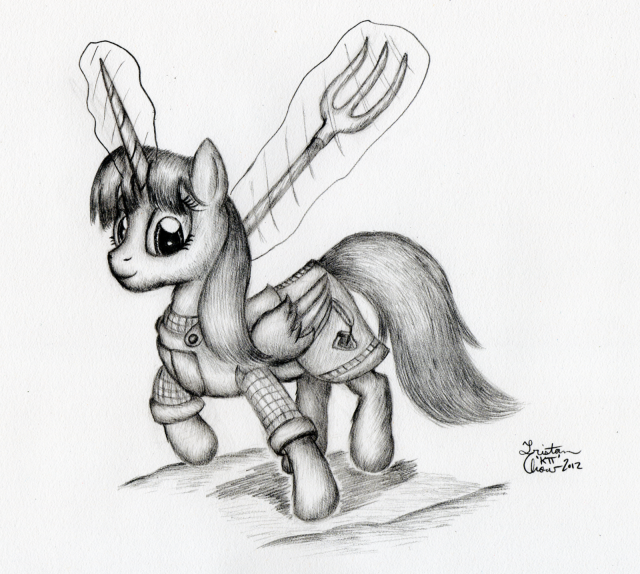 This is my first submission for the Artist Training Grounds’ week 55 theme: draw a pony ready for action. Because Fausticorn is totally ready for farming. Even if that might not be super dramatic.

Anyway, this was inspired by a discussion with Lauren Faust on the BronyCon weekend. To clarify, the topic moved to video games and Lauren quoted Harvest Moon as the one game that has kept her attention for a long period of time.

To be perfectly honest, this is all Google Images guesswork, given that I’ve never played one of the games myself. However, I’m sure many of you already know by now that once I get an idea that I really want to do, I just have to do it. So I took the Fausticorn design and outfitted her in an adaptation of one of the Harvest Moon girls’ outfits (I could never figure out what her name is since everyone seems to have a different idea of what it is).

I really wanted to do a coveralls design, but it really makes no sense on a pony. I was about halfway through trying to come up with an adaptation when I realized just how horrible it would be to try to put on coveralls over a horse’s barrel. Not to mention trying to fit denim over those hind legs. So I ended up keeping the top half, attaching it to a saddlepiece (technically leaving the midriff bare… how scandalous), which then attached to a denim skirt. The skirt seemed kind of plain on its own, so I added her cutie mark to it.

One thing that really frustrated me here was that for once my scanner picked up the drawing too dark. And try as I might, this is as much as I could lighten it without wrecking the image (the original drawing has the darkest spots a bit lighter).

Oh and to end on a semi-random note: Fausticorn’s forelock done in my style totally makes her look a bit like Twi. Which is really odd, considering all the other differences plus the fact that I based her body off of Luna’s.

I'm a computer programmer by trade, but I tend to dabble in many different creative activities.
View all posts by Kuroi Tsubasa Tenshi →
This entry was posted in My Little Pony: Friendship is Magic and tagged Fausticorn, Harvest Moon Crossover. Bookmark the permalink.