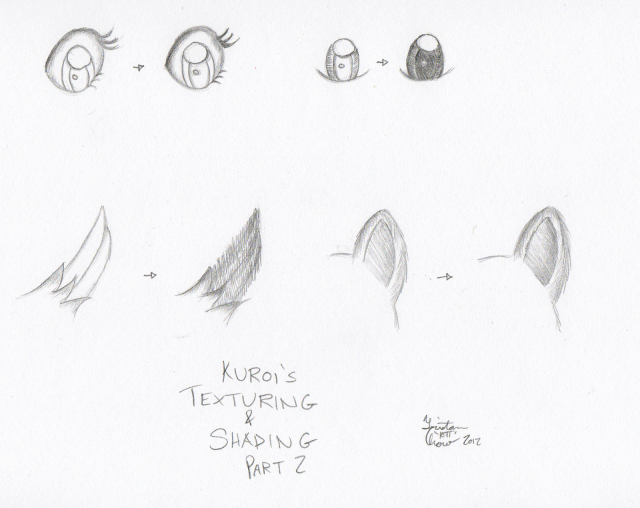 After some thought, I realized I didn’t cover everything in the last guide. So this is my third submission for the Artist Training Grounds’ week 29 theme: draw a guide on how to draw ponies.

The general steps are still mostly the same: texture lightly to map out the contours -> darken.

EYES
For the whites, I tend to use a texture similar to the horn. That is, without lifting my pencil. Note that the lash part of the lid may need to be redarkened to contrast it from the darkened whites (and you might notice I didn’t quite redarken all areas enough in the guide).

For the Iris, I do short, horizontalish (still curving to the contour) strokes with my 2B. I leave a bit of space in between on the initial mapping. The second part isn’t quite darkening perse, as the 2B should leave the first part pretty dark already. I usually fill the gasp here, letting the length be slightly more erratic than the first round. This should cause some white to be left around the pupil and bolstering the 3D effect.

For the pupil, I just straight up fill it in with 2B. It may take a couple layers to get it as dark as it appears, though.

WINGS
This applies to whether they’re extended or not and is kind of my newest development. For the liens I fully darken the down, but hold back a bit on the longer feathers. For the first step I apply light shading to the down, using the same short, tight strokes as I do for the coat. For the second part, I darken the down, but for the longer feathers I run a bunch of lines perpendicular to the lines from the first. I make the part that actually crosses the step one lines really dark and hold back a bit for the actual surface of the feather.

EARS
I treat the outer portion as part of the coat, but the inner portion I tend to texture like the bangs/mane/tail. That is, longer strokes, single direction. Then the second step is darkening as usual.

I'm a computer programmer by trade, but I tend to dabble in many different creative activities.
View all posts by Kuroi Tsubasa Tenshi →
This entry was posted in Guide, My Little Pony: Friendship is Magic. Bookmark the permalink.